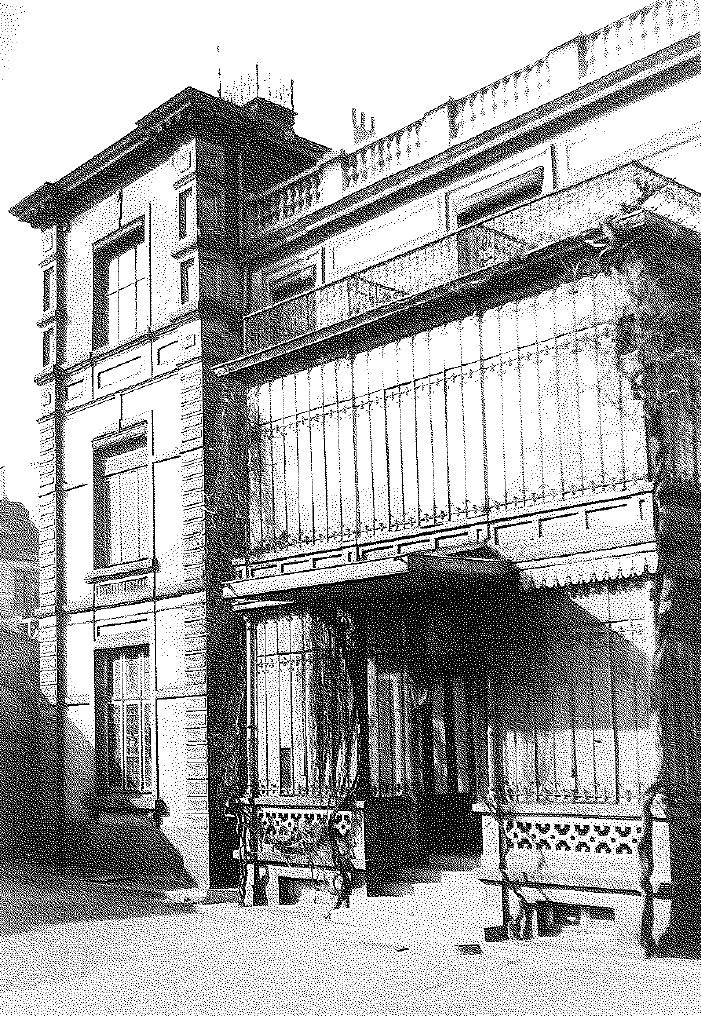 HISTORY AND ARCHITECTURE OF THE MAISON DES ARTS

In 1825, Mr. and Mrs. Eenens, a wealthy couple who owned a drapery business, bought a plot of land used as market gardens on the Chaussée de Haecht. Back then, Schaerbeek was still a very rural area. In the centre of the plot, the Eenens had a Neo-Classical-style townhouse built, with some service outbuildings on the left and stables on the right.

Their son, Lieutenant-General Alexis-Michel Eenens, had two wings added to the house, plus a porch and a third floor. In 1862, some of the garden was compulsorily purchased and the new Rue Royale Sainte-Marie was built over it.

On the death of the general, the house passed to his daughter Thérèse Eenens and her husband Georges Terlinden, a magistrate. They had a square tower added to the house and a saddle-room added to the stables (today used as the café).

In 1950, the house was purchased by Schaerbeek Council and renamed the “Maison des Arts”. The fountain was added to the garden at this time.

Today, the Maison des Arts houses the Francophone Culture Service of Schaerbeek Council, which organises art exhibitions there. In 2015, the building was listed as a heritage building by the Royal Commission for Historic Monuments and Sites. 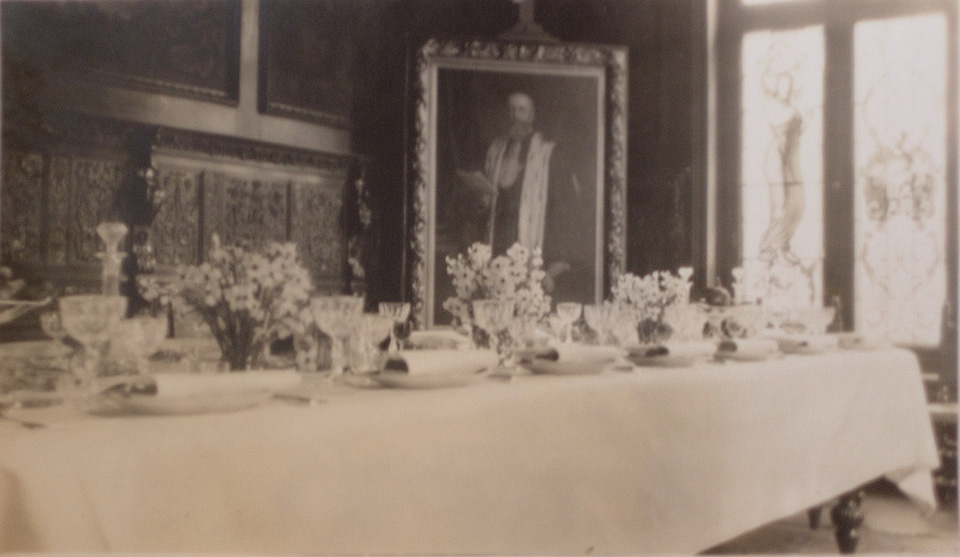 EACH ROOM HAS ITS OWN SPECIFIC USE AND DECORATION

The following description is of the house at the time when the Terlinden family, its last permanent occupants, lived here, and is how it was when purchased by Schaerbeek Council. 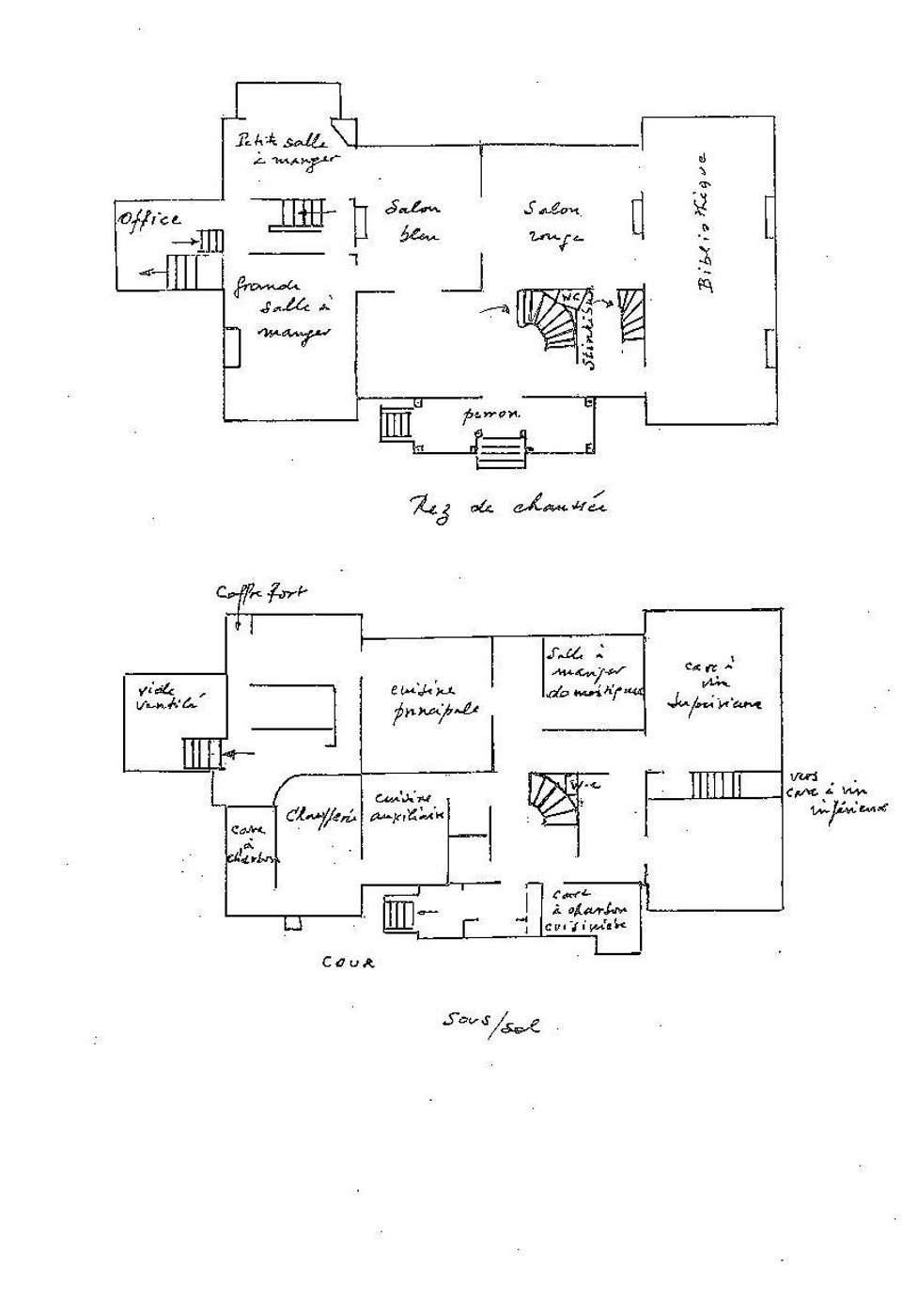 THE VERANDA AND DINING ROOM

The veranda was used as a small dining room or sometimes as a breakfast room for the whole family. Its walls are decorated with the coats of arms of the family’s ancestors and a clock over the fireplace. The family ate lunch and dinner in the dining room, where they were joined by Grandfather Terlinden, and sometimes guests. It is decorated in a style that appealed to the typical taste of the nineteenth-century middle classes. In the centre is a huge oak dining table, under a copper light fitting. The dining chairs are upholstered in embossed leather, topped with pairs of lions supporting the family’s coat of arms: a green triple-tiered lime tree and three black crescents. The family’s colours were green and yellow.

Two stained-glass windows depict the coats of arms of several generations of the family. The large window overlooking the courtyard depicts the family’s coat of arms set in foliage and supported by two women, one holding the mirror of truth and the other the scales of justice. Grandmother Terlinden was shocked by the low-cut dress of one of the women, and so a piece of opaque white glass was inserted as a “modesty screen” to cover her chest.

The fireplace is in the Flemish Neo-Gothic style and features a seascape in mauve Delft ceramic tiles and the mantlepiece features terracotta branches that previously concealed gas lights.

The lower half of each wall is covered in oak panelling, carved with wild images of devils, lions and animal-like humans. The upper half is covered in painted canvas mock-tapestries depicting chateaux. 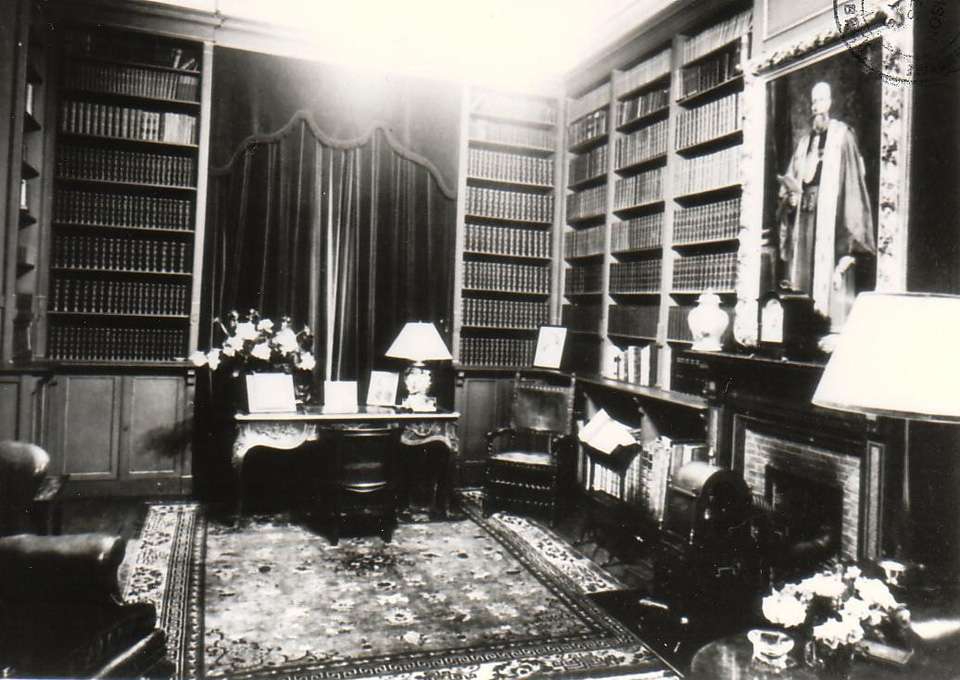 THE GREEN AND PINK SALONS AND THE LIBRARY

The small, Louis XVI-style salon and the large Louis XV-style salon were out of bounds to the children, perhaps due to the delicate silk upholstery of the armchairs.

The third and final room in the “enfilade” is the library. Its walls are lined with an impressive array of thousands of leather-bound books. It was a favourite place for coffee after dinner. The room was divided by two back-to-back sofas set in a padded surround, which has a concealed cupboard in which were stored adult parlour games including playing cards, mah-jong tiles and horse-racing games. 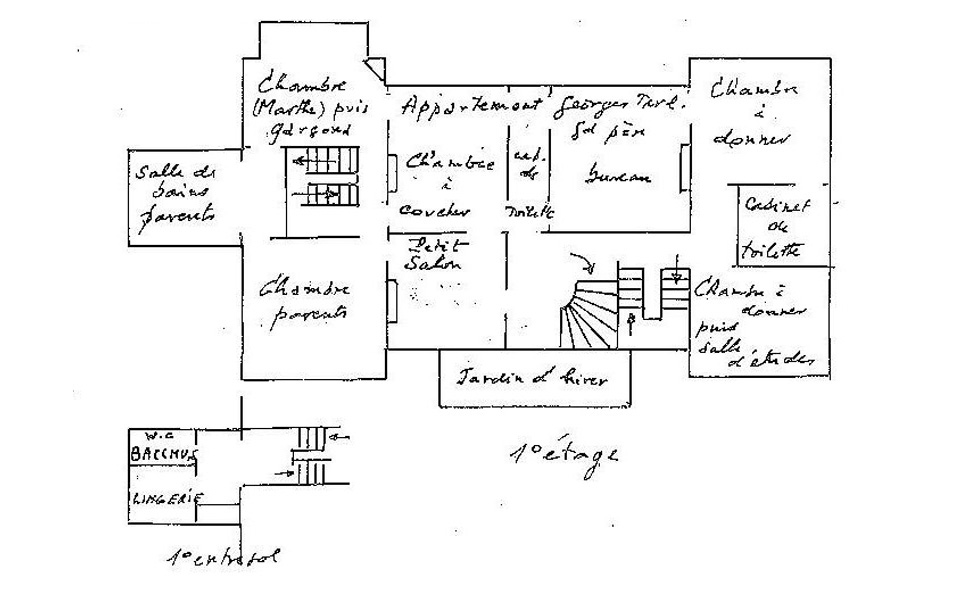 On the first floor were the family’s bedrooms: the master bedroom occupied by Mr. and Mrs. Terlinden with its ensuite bathroom, their sons’ bedroom with an ensuite classroom and the three-room suite overlooking the garden, occupied by Grandfather Georges Terlinden. The suite comprised a bedroom with a majestic bed, a dressing room and a study. At the top of the main staircase, a glazed door opened into the winter garden and another door led to the small salon, where Mrs. Terlinden organised daily household tasks and met her children at the end of the working day for a moment of relaxation and chatter. 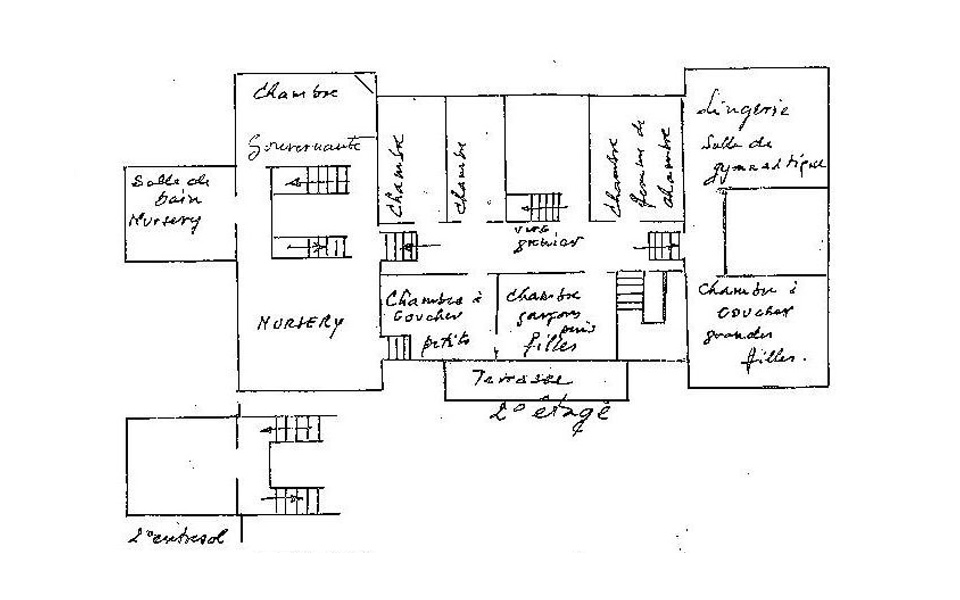 Known as the “Grande Nursery”, this floor contained a large day room, the nanny’s bedroom-cum-nursery and a bathroom-cum-kitchen. Between the last two rooms was a balcony with a wooden balustrade. A classroom was set up in one of the guest bedrooms overlooking the courtyard, furnished with an upright piano, school desks and a folding screen. 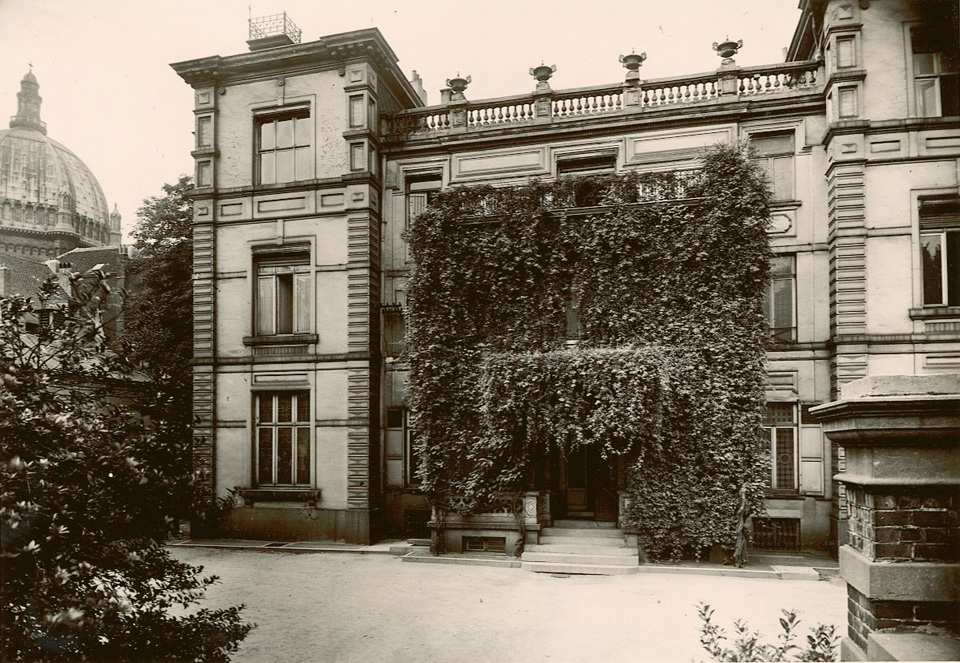 The space currently used as the café was once an orangery. Behind it on the garden side was the henhouse. In 1910, the garden still contained some splendid, large sweet-chestnut trees, but they were removed in 1928 to make way for a more stylised garden. After the house was purchased by Schaerbeek Council in 1950, the central pond and fountain were installed.

Good news, the Estaminet is reopening its doors!

Several spaces at the MdA are available for private hire: the hire fees received are used to offset the costs of putting on exhibitions.